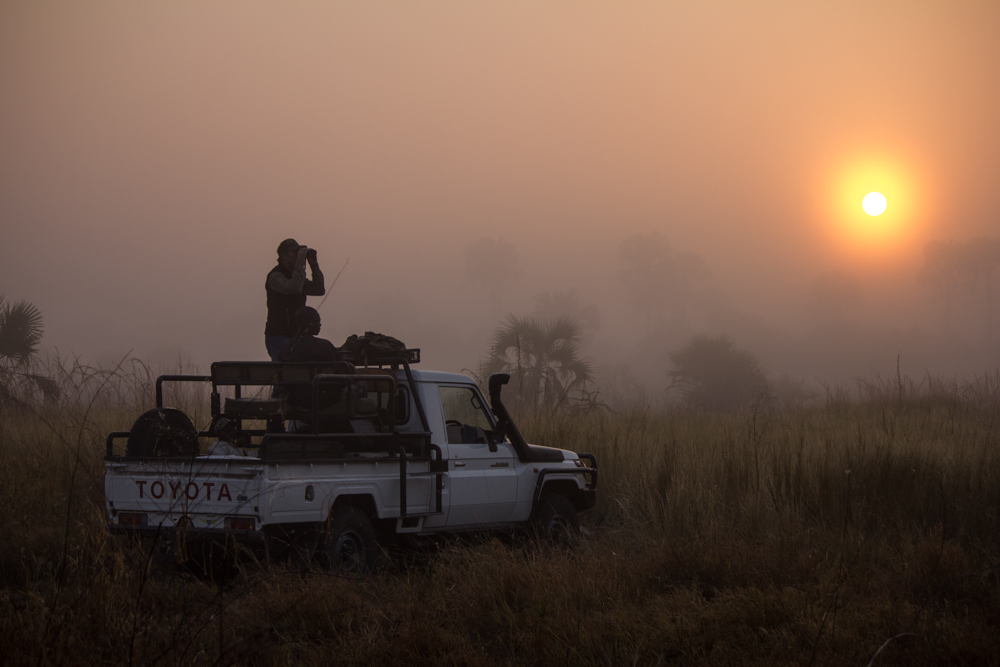 Everyone has a little cowboy in ’em. That’s what I told an executive from Marlin a few years back while he speculated on the continued popularity of lever-guns when everyone wanted an AR 15. From the time we hatch it’s the cowboy that captures our imagination. Cowboys are like super heroes who are real. No, they cannot fly and don’t have special powers, but nothing encapsulates the American spirit like the cowboy. It’s that gun-slinging, hat-wearing, tougher than leather persona that stirs something deep inside us.

If you’re a hunter, Africa should stir something inside you too. Our American west is still wild and rugged but it’s not as hard and wild as places in Africa like Mozambique. While taking a dangerous game shooting class at Gunsite Academy, Gunsite instructor Il Ling New told me she and gun writer Sheriff Jim Wilson were going to Mozambique for buffalo. Already knowing the answer, Il Ling grinned and asked, “Would you like to go with us?”

I eased back in my chair, pushed my hat up my forehead and I grinned right back at her. Il Ling said, “So, what gun you going to take?”

The African buffalo is a big critter. It also has a reputation for being belligerent, meaning; if you don’t shoot him right, it gets difficult to convince him to give up. Every year hunters are gored or stomped into blood puddles by African buffalos. Imagine a 1500 pound UFC fighter with horns and you get the picture. However, contrary to popular opinion, an African buffalo is not harder to kill than any other animal if you put a good bullet where it is supposed to go. Make a bad shot and, well, you have a cow of a different color. Maybe Craig Boddington said it best is his book, Buffalo, and I quote, “I’m not at all sure you can hurt a buffalo, but I’m very sure you can kill him.”

We were hunting with Zambeze Delta Safaris which is a top notch outfitter with a great reputation for putting their clients on trophy animals, particularly buffalo. Our area was slightly north-west of the Marromeu Reserve which is on the Eastern coast of Africa. Here buffalo can be found in the forest but are thick as thieves in the swamp nearer the reserve. In these grassy, waterlogged plains, they live with elephants and hippos, and crocodiles longer than a limousine.

Before daylight on our first buffalo hunting, Jim and I loaded up in an old, tank-tracked Swedish military vehicle and headed out. These surplus contraptions allow Zambeze Delta hunters to cover a lot of ground and water. Yes, they swim! Three hours later we’d spotted a herd of about 200 and since Jim won the coin toss he was up first. It couldn’t have gone better. After a 20 minute stalk we were within spitting distance of the herd. Secluded by some tall, saw grass we motionlessly waited for about five minutes and Jim smacked a super nice bull in the heart with a Barnes Triple Shock bullet from his .375 H&H. The brute stumbled off about 15 yards and promptly fell over dead.

Simple enough I thought. By noon we had Jim’s bull loaded and were looking for another herd. It didn’t take long and we were off on another stalk. Again, we used the saw grass as cover but that’s also where the water was. I’m talking waist deep water that’s as black as day-old coffee and smells about the same. We pushed through to within 50 yards of the herd. They saw us and stared at us. I felt like I’d just stepped onto a street in the bad part of town, facing an army of armed and dangerous gang members!

You might wonder if the 140 year old 45-70 is “enough gun” for buffalo. The answer is yes and no. Originally loaded with a 405 grain lead bullet at about 1300 fps, the 45-70, though powerful at the time, was not an African buffalo buster. However, modern rifles like the Marlin 1895 can handle very powerful – magnum like – 45-70 loads. Mine was stuffed with Buffalo Bore 430 grain hard cast lead bullets which left the 18.5 inch barrel at almost 1900 fps! That’s nearly 458 Winchester Magnum performance.

Generally, buffalo are first shot with a soft point bullet with the hopes of inflicting as much internal damage as possible. Then, if necessary, follow-up shots are made with solids to guarantee as much penetration as possible. I did not have that luxury. Hard cast lead bullets are, in effect, solids. This meant that for my first shot I had to be certain another buffalo was not behind my target or that I could only take a facing shot.

That left my professional hunter and me with a dilemma. There we sit in the edge of the tall grass with about 500 eyes looking at us while we scanned the heard for a nice bull. One willing to face us head on or step into the clear. It was hot, I was sweating, the skeeters and tsetse flies were biting, and about every five minutes a bull would start to move into a position for a shot. I’d put down my Swarovski binoculars and ease into a seated shooting position. Then, a cow or calf would get in the way or the bull would simply move back into the herd. Frustration! I felt like Tebow looking for a team.

This went on for three hours. Three hours! It was brutal. We could not move because there was never a moment that at least one buffalo was not watching us. My back hurt, my legs hurt and I got a cramp and had to rub it out. I was thirsty, hungry, and losing patience. And, to complicate matters, about 100 of the buffalo—some of the gang members—were working into the saw grass behind us. It was, to be honest, a bit scary and completely nerve wracking.

Finally, with only an hour of daylight left, we knew we had to act. So, we stood up hoping one of the nicer bulls would give us that notorious stare allowing me to shoot him right in the throat. It didn’t work that way. We stood up. There was no shot. After a few seconds the herd thundered off. My PH, Julian Moller, said, “Stand fast. I think they’ll come back to check us out.” He was right. All of a sudden several hundred buffalo charged us. They stopped at about 60 yards and stood there like a bunch of cows looking at a new gate.

Julian picked out a bull and just as I got the crosshairs lined up, a calf stepped in front of him. They ran off again. When they left they pulled the buffalo from the long grass behind us out and they ran by close enough I could have spit on them. This happened two more times. The last time, I got a shot at a nice bull.

The shot was there, I thought my aim was true. I was certain. I was wrong. It was a mistake I’ll never forget. Immediately after the big Marlin roared I heard the bullet smack. The buff stumbled, wheeled to his right and run off with the rest of the herd. We ran after them but our bull was lost in the dust and the stampede of blackness. After 200 yards I knew we had a problem and my mouth was so dry I couldn’t have licked a postage stamp.

We were losing light. Julian ran to fetch the swamp buggy and we immediately took up the track. After about 800 yards we spotted them and our bull was bring up the rear; running like he’d broken the heel of his boot. Julian said, “Get another bullet in him! When I stop, shoot him!” He slammed on the brakes; I stood up and whacked the running bull in the butt at about 120 yards. I levered the gun and hit him again. The buff swung to his right and headed into the tall grass. That’s when I knew it was going to get worse.

We bailed out of the buggy, I turned the scope magnification down to 1X and shoved three rounds in the rifle, all with trembling hands. We could just see the bull’s back behind a wall of grass 60 yards away. As we started to move in, rifles at the ready, he laid down. He was going to try and ambush us. It would not be accurate to say I was scared of the wounded buff because I was sure we could stop him; Julian had his 470 double and I had a full load in my 45-70. The fear was from the unknown; I didn’t know what the buff was going to do, I didn’t know what my PH was going to do, and I wasn’t all that sure what I was going to do.

We closed to 20 feet and Julian, rather calmly I might add, said, “Shoot him in the shoulder.” When I did, things got western. The buff exploded up and looked at us like he had just caught us in bed with his wife. I heard a thunderous roar from Julian’s .470 but the buff showed no reaction. I’d already cowboyed the lever gun so swung to the big black head, found the reticle, and pressed the trigger. I quickly ran the lever but when the rifle leveled out the bull was down. I shot him two more times in the chest just because I thought it was the right thing to do.

We found my first shot had hit about three inches to the left of my point of aim. The bullet penetrated four feet along the right side of the spine destroying the back strap. Three inches! Three inches to the right and it would have torn out the spine and dropped the bull where he stood. We also found Julian’s bullet had struck the horn and glanced off. It was the head shot from the lever gun that ended it.

I guess you could say I screwed up and then had to cowboy up to correct my mistake. Looking at the damage the 45-70 did to the buff, Julian said he would not hesitate to trust the rifle or ammo again. I would too. But, instead of being certain of my first shot, I would be absolutely certain. That was Craig Boddington’s advice. I’d heard it plainly, just failed to follow it. Cowboy’s can be stubborn like that.