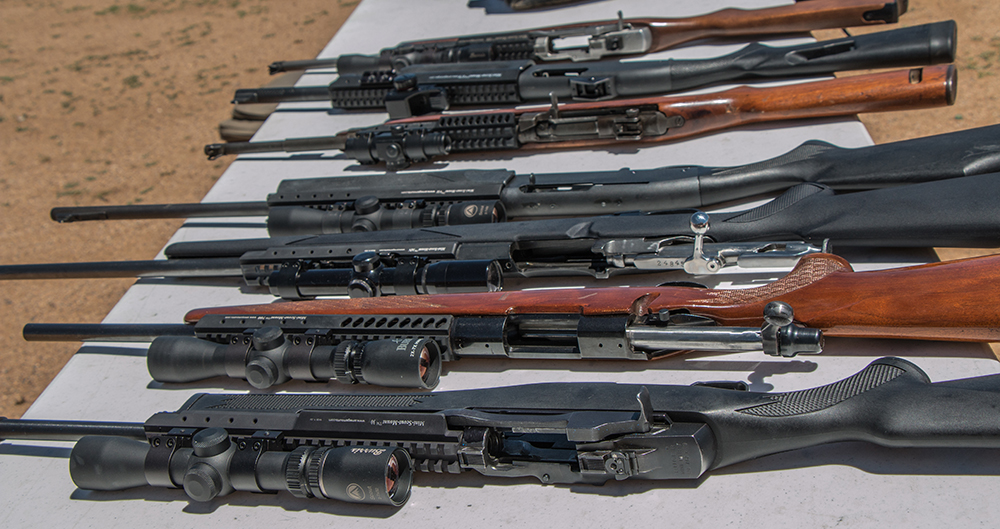 This is the fourth in a series of articles concerning the Scout Rifle. It could be considered an addendum to my book, The Scout Rifle Study.

The Problem with the Scout Rifle Community

The members of the Scout Rifle community exasperate all of the problems with the Concept, the name, and the Scout Rifle. Some believe that for a rifle to be a Scout Rifle it must fully meet every aspect of Cooper’s definition. I believe that since Cooper defined the Scout Rifle; this is a logical approach. However, the problem arises when his disciples disparage those who do not fully understand the Concept, its history, or Cooper. A fellow may present a rifle that’s almost a Scout Rifle, only to be met with condescending treatment. These folks will use the term pseudo-scout, lever-scout, or some other hyphenated-scout moniker, to describe these rifles. Ironically, many of these, shall we call them elitists, have never fired, handled, or even seen a rifle that met every element of Cooper’s definition. (Truth is, most people haven’t.)

That would be an unworkable solution. When you start bending the rules you end up with the American tax code where with the right accountant and attorney you can, well, slide by just about anything you want. Can you imagine someone creating a rifle that almost meets Cooper’s definition and then suing those who refuse to allow him to call it a Scout Rifle? No? If someone can use Gorilla Glue to style their hair and then sue the company with the defense they are as dumb as a box of rocks, well, then it is not outside the realm of possibility.

Some of the discussions on various forums or social media are nothing but arguments about what is and what isn’t a Scout Rifle. Any way you look at it, permitting deviations from the definition is a problematic approach. Of course, maybe there is no problem at all. Who gave Jeff Cooper the right to establish a firearm classification and to set all the parameters associated with it? Really, no one, except those who felt he had earned the privilege to do so? Should all the other folks even care?

The underlying fact is that a rifle that meets every aspect of Cooper’s definition is indeed a very handy rifle that would serve someone doing scout-like things anywhere in the world very well. Cooper was, as bad as some might hate to admit it, right. Those who have worked with a rifle meeting Cooper’s definition will tell you it is a joy to carry, handle, and shoot. By allowing any rifle that looks like a Scout Rifle, but is definitely not a Scout Rifle, to carry that name, the Concept loses value and meaning.

Is there an answer to the problem? Probably not. While the Scout Rifle Community is a small but reasonably assembled group, the gun writers who do most of the educating of the masses about Scout Rifles are mostly uninformed on the subject. Just the other day I read an article where a frequently published writer claimed the Scout Rifle was an off-shoot from rifles used by the Australian Army in the jungles of New Guinea, and Jeff Cooper was only mentioned in passing. Articles like this, written by the uninformed, are a large part of the problem.

It’s misinformation like this that guides those who are interested down a path that does not find favor with the Scout Rifle community. Believe it or not, gun writers do not know everything. (I know, I’m talking about myself, but there’s a lot of gun stuff I don’t know a lot about. It’s the stuff I avoid writing about and others should do the same.) That coupled with manufactures using “Scout Rifle” as a name for rifles that are kind of like a rifle Jeff Cooper defined, to something dynamically opposite to what Jeff Cooper intended, makes it impossible to control the narrative.

Hell, it’s no wonder there’s so much confusion and disagreement about what is and what is not a Scout Rifle. Cooper gave us the definition of a Scout Rifle; the problem is a lot of people don’t like it or agree with it. They’ll argue that both technology and the mission have changed. Well, no shit! While this might justify some modification of the definition, no one but Jeff Cooper – who, for those who may not know, is dead – are in a position to make those changes. And, even if Cooper was still with us and agreed that technology and the mission warranted changes to his definition, there would still be those – in and out of the Scout Rifle community – who would argue this or that element of any new definition that might be presented.

Cooper defined a Scout Rifle for a certain purpose. If your purpose or space of existence is different, you most likely need a different type of rifle than Cooper conceptualized. Calling your adaptation of a rifle you do not think you need, a “Scout Rifle,” shows your lack of understanding of the concept, while at the same time expresses a need for validation through association with a proven weapon system you do not want!

It should be the job of gun writers and the Scout Rifle community to educate others about the history of the Scout Rifle Concept, while at the same time promoting an understanding of world-wide applicable, geographically specific, and individually tempered, general purpose rifles. Though all are inspired by a very similar practical need, they are not the same thing. In other words, not all useful, general-purpose rifles are not Scout Rifles.

Many who are interested cannot afford the Steyr Scout, which is the only commercial Scout Rifle Cooper blessed. And, creating a custom definition-meeting rifle is very, very costly. The average guy with a wife and two kids and an average job simply cannot afford to do it. This is of course why Ruger introduced the Ruger Gunsite Scout Rifle; it’s a modernized approach to what Cooper envisioned but more importantly something the average guy can afford. Though it’s a fine rifle it falls a bit short of what Cooper envisioned. Is it a Scout Rifle?

Well, it’s as close as most of us will ever get to a rifle that will meet Cooper’s definition. I know I fall in that group; was it not for my profession and industry connections, it’s doubtful I would have ever claimed experience with or ownership of a true Scout Rifle, or even a Steyr Scout. If you want a true Scout Rifle you have to spend money and Cooper was OK with that, he felt perfection should not be sacrificed for affordability.

And maybe with that we’ve found the primary problem with the Scout Rifle; the damn thing is expensive! It always has been and most likely always will be. This means most of us who are interested will purchase or craft the approximations we can afford, will tweak them for our personal needs, and will also make excuses for why our rifles fall short of the definition or why the definition falls short of our actual needs. There is nothing – NOTHING – wrong with that. Especially if while doing so we remember and honor Cooper’s concept without trying to change it. And, maybe that is the message the Scout Rifle Community needs to support. For the most part, we are all on the same road, we’re just riding different horses.

In Part 5 of this series we will examine how performance compares with definition, with regard to a Scout Rifle.