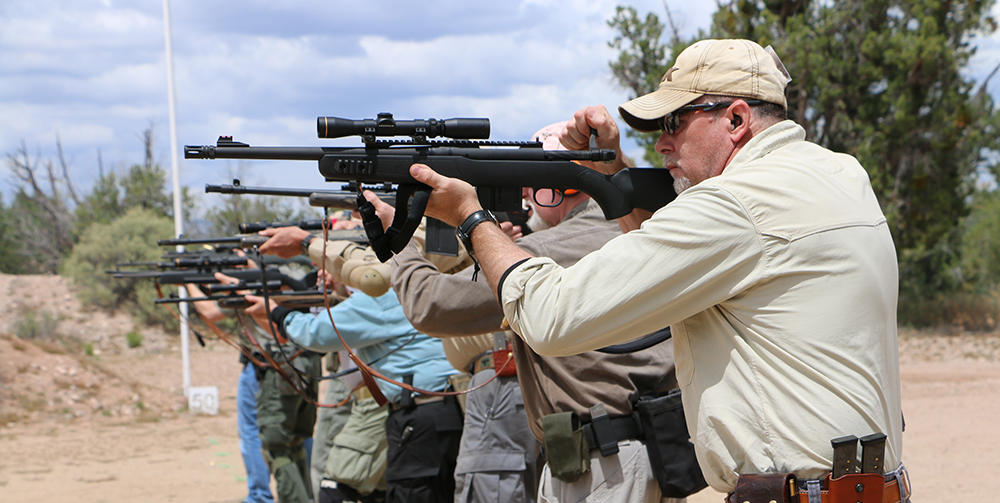 This is the fifth in a series of articles concerning the Scout Rifle. It could be considered an addendum to my book, The Scout Rifle Study.

The Disparity between Definition and Performance.

Jeff Cooper felt that he could prescribe a definition for a rifle that would yield a particular level of performance. This is of course a very analytical approach to any problem. Ideally, you identify the desired/proven characteristics, coordinate them into a package, and you will achieve the level of performance you want. The result is not always what is desired. I think it is clear that Cooper realized this from the outset and even more so as he continued to work with various examples of rifles that were created by virtue of the definition/s he provided.

I say this because he frequently used the terms, “handiness” and “friendliness” to describe the Scout Rifle. For example, in one of his latest writings on the Scout Rifle in his C Stories book, Cooper said, “…but its overriding characteristic is its friendliness.” [emphasis is the author’s] This is very important with regard to the Scout Rifle definition and the one element that is most often overlooked. In essence, what Cooper was saying is that I have provided you with an elemental description of what I believe to be the best general-purpose rifle that can be made, but more important than the definition is the friendliness of the rifle.

Why is this so important? Clearly, we must all acknowledge that it would be possible to build a rifle to the definition as provided by Cooper, but that it could be unfriendly, uncomfortable, and even unhandy to use. Paraphrasing Cooper, he once wrote that a scout scope alone does not make a scout rifle. By the same token, conformity to the definition does not either; the rifle must be friendly in the field.

There is wiggle room in Cooper’s definition with regard to weight. It started at 3 Kilos, climbed to 3.5 kilos, and in 2004 when C Stories was published – after the introduction of the Steyr Scout Rifle – it dropped back to 7 pounds. There’s wiggle room with regard to sights as well. Cooper seemed to authorize a rifle without an optical sight, a rifle with a scout scope, a rifle with a traditional – low powered – scope, and more commonly, a rifle with an aperture sight and a scout scope. I don’t want to argue any of those points here, but I want to point out that while his elemental definition could be ambiguous, nothing is more ambiguous than saying a rifle must be friendly.

Different shooters will interpret “friendly” in different ways, depending on their physical make up and the most important task or mission they may ask a rifle to perform. But let’s not focus on varied understandings of what Cooper suggested, let’s just universally accept the fact that Cooper wanted a rifle that would perform very well in the field while being used to execute tasks synonymous with scout-like, field exercises.

Is this friendliness, effectiveness, or performance, something we can measure? Yes and no. At the base line, the rifle must be friendly and effective when used by the person who intends to use it. Because of that, any test or measure must be conducted by the user as opposed to someone evaluating a rifle for another. You alone must determine the friendliness of any rifle you might use. Sure, someone of similar size, mind, and skill, could make a qualified guess as to how you might agree with a rifle. But, for a definitive answer, you must find it yourself.

The next question is what questions we would want to have a rifle to answer so that we could make this friendliness determination. The options are endless. However, when I conducted the research for The Scout Rifle Study, I devised four drills – influenced by Cooper’s writings and my experiences with testing firearms – that I felt would help me and others effectively measure this seemingly mythical description.

The test I devised involves four drills, each conducted from a field shooting position: standing, kneeling, sitting, and prone. Each run through the test required seven shots and the test was to be ran three times for a total of 21 shots to get an average. Distances for the test were limited to a maximum of 100 yards to allow for the evaluation to be conducted at almost any range, and the target was simply a six-inch circle. The distances and target size would help circumvent a tremendous reliance on marksmanship ability. The goal was to use the test to get a feel for how friendly a rifle might be.

The first drill somewhat replicated Cooper’s snapshot challenge but added multiple shots to allow for evaluation of how fast, easy, and smoothly, a rifle’s action might be manipulated. For this drill the shooter starts standing, 25 yards from a target, with the rifle at high ready. On the signal he fires three shots at the target as fast as it is thought that hits can be obtained. With the various rifles I’ve used during this exercise, times have ranged from between four and eight seconds.

The second drill was to represent a worst-case scenario where the reserve iron sights Cooper thought so important must be used. It was to replicate damage to an optical sight that had to be removed. Another element of this drill was that if a rifle had a detachable magazine, the drill had to be conducted without it. I’ve taken a lot of flak for this stipulation, particularly from those who feel an AR of some sort can qualify as a Scout Rifle. Their argument is, what kind of a fool would lose or damage his magazine? My answer to this is, the same kind of fool that would lose or damage a riflescope. I’ve seen detachable magazines lost in the field by hunters many times. I’ve also seen them cease to work. It happens and should be a consideration.

For this drill the shooter starts standing at the high ready with the rifle in one hand and a single cartridge in the other. On signal, he drops to the kneeling position while opening the action and inserting his single round, to engage a target at 50 yards as fast as he feels a hit can be obtained. With the various rifles I’ve used during this exercise, times have ranged from between five and 10 seconds.

The third drill is conducted at 75 yards from the seated position. It simulates firing the last round in your rifle but needing to quickly fire another shot. The shooter starts with the rifle at the high ready with a round in the chamber but no ammunition in the magazine. At the signal he drops to the seated posting, fires a single shot at the target, conducts a reload, and fires a second shot at the target. He may load the second cartridge in any manner he chooses. (Rifles with detachable magazines have a supposed advantage here because they can insert a full magazine and a magazine is less delicate to insert than a single cartridge, and contains more than one round.) With the various rifles I’ve used during this exercise, times have ranged from between 11 and 18 seconds.

The final drill consists of firing a single shot at 100 yards from the prone position. The shooter starts with the rifle at high ready and on signal drops to the prone position and fires one shot. If the rifle is equipped with a bipod it can be used but not deployed until the start signal is given. If it is using a quick detach bipod – like the Spartan Javelin – it can be held in one hand but not installed until the signal is given. Yes, a six-inch target at 100 yards is not hard to hit from the prone position and a Scout Rifle should be able to hit that same target at, at least 200 or even 300 yards away. But remember, the test is not an evaluation of shooter skill or trajectory knowledge, it is one to measure the friendliness of a rifle. With the various rifles I’ve used during this exercise, times have ranged from between 8 and 12 seconds.

Though physical ability plays a large part in the time it takes to perform the drills, especially drills two through four, I believe this is a great tool that can be used to measure the friendliness of a rifle. But mostly, only for the person conducting the drill. A physically fit man will conduct the drills much faster than an older, less athletic person, which of course is why it’s important to conduct the test for yourself.

Based on the variation in the best and worst total times from each drill, the difference is as low as 30 seconds to as high 42 seconds. If you look at the best and worst performances in individual drills, the difference ranges from a low of 27 to a high of 46. That’s a difference of 41%! This clearly illustrates that some rifles or at least some features of some rifles are much more friendly than others. Well, at least when Richard Mann is shooting them.

Had you been the shooter, based on the results of this test, which rifle would you prefer?

In Part 6 of this series, we will discuss the rifles used in the test, fully examine the best performing rifle, and then tie parts 1 through 5 of the series together to complete the, Analysis of the Scout Rifle.