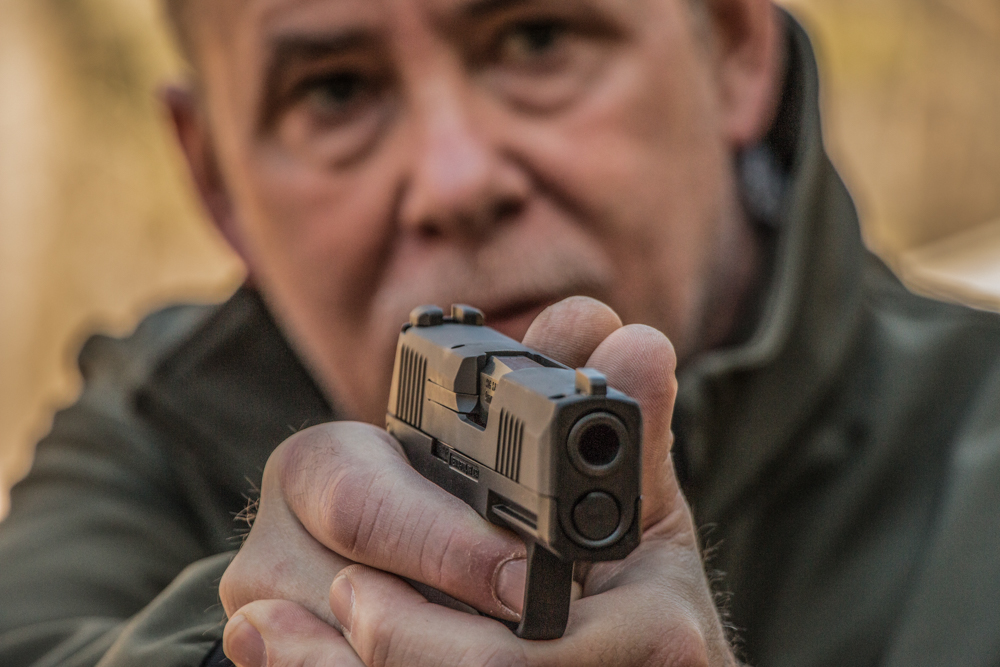 Grandpa had a pistol. Actually, it was a Smith & Wesson model 10, 38 Special revolver but he called it a “pistol.” Us youngsters marveled at Pa’s pistol, and he accommodated our curiosity by letting us shoot it. Grandpa lost his leg—just below the knee—during a train accident when he was 18. Given there was not much employment opportunities for an uneducated cripple, and given it was the height of prohibition, Grandpa became an entrepreneur. Or, more accurately, a moonshiner; a moonshiner who carried a pistol everywhere he went.

Grandpa also used to tell us boys, “You should never pull a pistol unless you’re going to use it.” Of course we all translated “use” to mean, “shoot.” When I became a policeman I figured that was good advice to follow, seeing as how it came from one of the smartest men I ever knew. (Grandpa only made it through the 3rd grade but self-educated himself, built several thriving businesses, and became a member of the Board of Education.) Problem was, I misunderstood the counsel, because you can use a pistol to do a lot of things other than shoot.

Working the streets, it didn’t take long to realize being scared was sometimes part of the job. (Any cop who tells you they were never scared, is either lying or they were not a real police officer.) I learned that in some situations pulling my gun—just getting it out of the holster and in my hand—provided a level of comfort and an elevated level of safety. Later on, when I trained new police officers, I made sure they understood the advantages of having their handgun out of their holster, before they might actually need to shoot it.

I also learned that when confronting bad guys doing bad things, pointing a gun at them was a very effective way of getting them to stop doing bad things. Now don’t misunderstanding me, I didn’t point guns at folks for trespassing or jaywalking. What I’m saying is that when confronted with a suspect presenting a clear and present danger, pointing a gun at them—using your pistol—is a wise thing to do.

You can use your pistol for a variety of things. You can use it to provide contentment in times of strife. You can use it to take control of potentially dangerous and deadly situations. And, you can use it to stop an attack that has the potential of delivering grave injury or death to the innocent. What you need to understand as a citizen is that there can be a fine line between brandishing, wanton endangerment, and the justifiable use of a firearm. Because of that, it’s a good idea to seek training from a reputable and qualified source.

Like with most of the lessons I learned from my grandfather, he was right about this one too. Don’t pull your pistol unless you are going to use it. The key to this nugget of wisdom is the understanding of how you can effectively and legally“use” your pistol and that using a pistol does not always involve pulling its trigger.

Personal protection with a handgun is not just about fending off muggers, homicidal maniacs, and vampires. There are other bad things is this world. I grew up in the Allegany Mountains where copperheads and timber rattlers were the price we paid for the serenity the hills provided. I developed an intense dislike for both. The only thing that can ruin a fishing trip or a picnic faster than a Covid-loving politician is a poisonous snake.

When Grandpa wanted us kids to enthusiastically tackle some chore, he often told us to get at it like we were “killing snakes.” I never really understood what that meant until I fought a four-foot copperhead while armed with a shovel. You can kill serpents with hand tools, but if I ever do it again it’ll be because I’m out of ammunition.

The only thing to brag about after my first gun battle with a snake was that the timber rattler I eventually killed was almost as long as me. After a magazine full of hardball from a 1911 the snake coiled up under a laurel bush, I fetched a .22 rifle, and finished the job. Lesson learned; it’s hard to hit a moving target the size of a water hose when you’re afraid it’s going to give you a fanged surprise.

If you sometimes encounter venomous snakes in your wanderings and don’t exercise the live and let live philosophy, a shotgun would seem the obvious choice. But shotguns are hard to carry in your pocket. Continually out and about in the underbrush, I’ve found CCI’s shotshells are an ideal solution. A snake can strike about one-half to two-thirds its body length. In North America a six foot venomous snake is on the large side so a safe engagement distance should be on the other side of four-feet. Sure, you can get closer but like my son’s favorite thing to say when he was 10, “Why?”

CCI now offers two versions of their handgun shotshells. The standard version is loaded with #12 shot (9mm Luger) or #9 shot (38 Special/357 Magnum, 40 S&W, 44 Special/Magnum, 45 Auto, and 45 Colt.) The newer Big 4 loads are loaded with #4 shot. For snakes, the smaller shot is the way to go; the patterns are denser and the shell delivers a more pulverizing effect. You should test these loads in your handgun for pattern size at distance. Just be advised, few semi-automatic handguns will reliably cycle shot shells, so you might have to manually rack the slide after the shot. That’s OK if you keep your distance, snakes don’t shoot back.