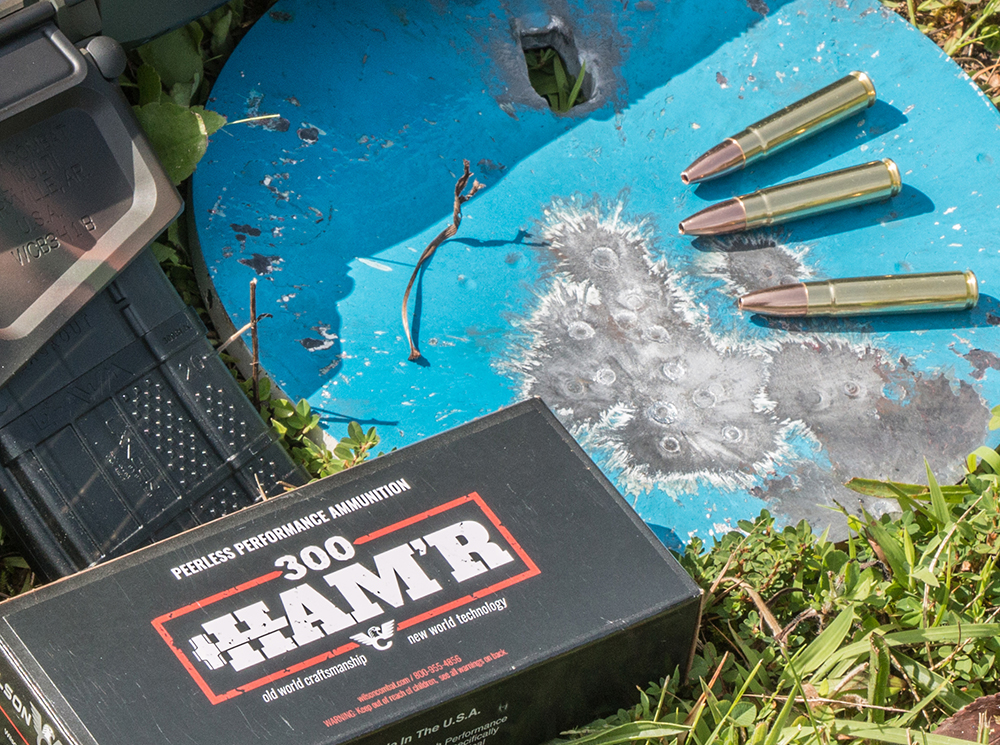 My grandfather’s favorite tool was a hammer, and he had several. For finish carpentry he had a small one, for framing he had another, and for tearing $#!@ up he had a big one. Wilson Combat has a new hammer and AR 15 aficionados should be excited. It’s called the 300 HAM’R and it essentially duplicates the performance of the iconic 30-30 Winchester.

But first, a history lesson on the efforts to enhance the down range performance of the AR 15. Originally the AR 15 was chambered for the 5.56 NATO/223 Remington, but since the turn of the century we’ve seen a bunch of new cartridges, all purporting to be the next best thing to make the AR 15 hit harder. Arguably, it all started with the 6.8 SPC, and some thought it would supplant the 5.56 as the standard issue cartridge for the American Soldier. It didn’t and in fact has for the most part fallen out of grace with shooters.

The 6.5 Grendel introduced in 2003 is still little more than a cult cartridge. It has appeal, as did the 30 Remington AR, which was introduced in 2008. However, like with the 6.8 SPC, these cartridges require—as a minimum—a new bolt and different magazines for any AR chambered for the 5.56 that you want to convert. Between then and 2011 a variety of wildcat cartridges designed for the AR 15 appeared. Some had lots of merit but never really caught on. It was then that Remington went back almost 20 years and introduced a wildcat cartridge designed in the 1990s—the 300 Blackout.

The Blackout took the shooting world by a storm. It wasn’t long until almost every AR 15 manufacturer was offering a rifle chambered for it, and almost every ammunition manufacturer was loading 300 Blackout ammo. The timing was right and the name was cool, and the cartridges compatibility with suppressors rocketed it to stardom. But there was a problem; shooters soon found out that if they accidentally chambered a 300 Blackout cartridge in their AR 15 chambered for the 5.56, they could induce an explosive separation of parts.

While all this was going on Bill Wilson of Wilson combat was living at his ranch in Texas and hunting hogs with a vengeance. A faithful AR shooter, Wilson tried all these cartridges, looking for the ideal way to deliver maximum power down range, with minimal alteration to the AR 15 platform. After a short love affair with the 30 Remington AR – which Remington failed to market or support – he legitimized a wildcat .30-caliber cartridge, made by slightly altering the 223 Remington case, and called it the 7.62×40 WT.

The 7.62×40 worked well but was only marginally more powerful than the 300 Blackout, not enough so to steal shooters away from that cartridge or start its own following. After time Wilson began to dwell on the subject and figured he could increase the capacity of the 7.62×40, while still using a wide variety of  .30-caliber bullets suitable for hogs, deer, human adversaries, and even critters as large as elk. He was having good luck with the cartridge but after discovering its fondness for Hodgdon’s CFEBLK powder, realized he had hit on something special.

Bill discovered that out of a 18-inch barrel his new cartridge would not only duplicate but better the performance of one of the greatest American cartridges ever produced. After initially considering naming the cartridge the 30-30 AR, Bill and his team at Wilson Combat settled on the 300 HAM’R. I don’t know how many feral hogs Bill and his associates have taken with the 300 HAM’R, but I’m betting its more than you have ever taken with any cartridge. The 300 HAM’R is field tested, proven, and it works.

Bill sent me one of his Tactical Hunter AR 15s chambered for the 300 HAM’R and I’ve shot it a lot. In fact, I’ve fired every round of ammo Bill provided me, and that included samples of all seven loads Wilson Combat offers for this cartridge. As you would expect, like any firearm from Wilson Combat, the rifle shoots very well; it is completely sub MOA capable. In fact, I fired a 10-shot group using two rounds each of five different loads, with bullet weights ranging from 110 to 150 grains, and the resulting group measured 1.56 inches. I’ll be you don’t own another rifle capable of ding that.

That’s a testament to the rifle and the quality of the ammo. What you are probably more interested in is if in fact this cartridge is an AR 15 version of the 30-30 Winchester. Based on my testing of more than a dozen factory 30-30 loads, and the seven 300 HAM’R Wilson Combat loads, it’s that and more. Not only will the more aerodynamic detachable magazine friendly bullets shoot faster and flatter out of the 300 HAM’R, they’ll hit harder down range because they retain their velocity better.

I can see a lot of potential for this cartridge. Those who like to hunt with their AR now have a powerful option, and all that’s required is a barrel change. The 300 HAM’R uses the same bolt and magazine as the 223 Remington. In a pure tactical environment, the 300 HAM’R will deliver more energy on target than the 5.56 NATO, 6.8 SPC, 7.62×39, and the 300 Blackout, and there are lots of viable bullet options for a variety of applications.

Right now you can get your rifle and Wilson Combat has seven loads to choose from. The Hunting Shack and Black Hills will also be loading ammunition, and Hornady might be poised to offer one or more loads as well. Will the HAM’R replace the 5.56 NATO for the military or universal civilian and law enforcement use? I doubt it. But, it is one of the best general-purpose cartridges available for the AR 15.

Grandpa would have liked it, that I’m sure of. He had a general-purpose hammer he kept handy for just about everything. He also had a 30-30 Winchester he kept around for the same reason. I learned allot from Grandpa. Like when you find a hammer you like you better spend the money and then hold on to it. This rifle now lives with me!