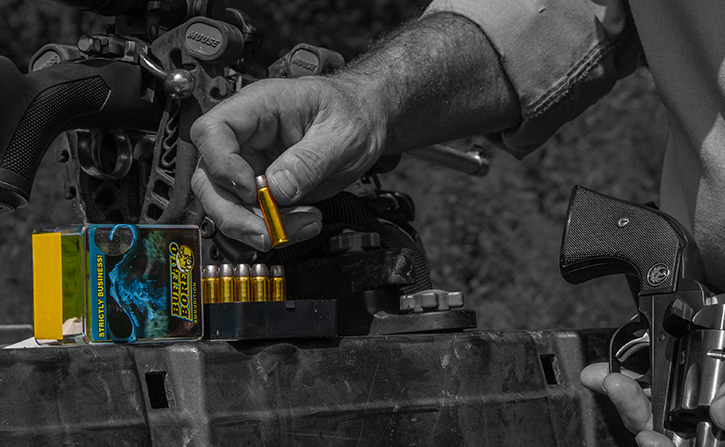 In this modern era, lead bullets are often looked upon as antiquated projectiles unsuited for anything other than target practice. Even then, some shooters feel that only grandpa or an old grumpy gun writer would shoot a lead bullet. After all, ballistic engineers have turned out some amazing projectiles that far exceed the performance and practicality of lead bullets. Right? Not exactly, all lead bullets are not created equal.

Lead is a soft and very malleable metal. Early on it was a great bullet material because firearms launched projectiles at very slow velocities with low pressures. As velocities and pressures increased it became necessary to increase the hardness of the bullet so that it would not lead – foul – barrels and so that accuracy would not suffer. Adding tin and antimony to the lead did this, increasing the Brinell hardness from about five to as high as 20. These harder than lead bullets became known as “hard cast” bullets.

For example, a bullet with a make up of 94% lead and 5% tin will have a Brinell hardness of about 10 and can handle the velocity generated by most defensive handgun cartridges, depending on pressure. Somewhere between witchcraft and math the proper hardness is determined but regardless of the velocity generated, higher-pressure cartridges require harder bullets. What many shooters do not realize is what a hard cast lead bullet is capable of in terms of accuracy and terminal performance.

Lead bullets have long been popular for target shooting due to ability of the bullet to deform and fill the bore. This is known as obturation and it insures complete engagement with the rifling and prevents gas blow by. For optimal performance the bullet must be soft enough to obturate without leading the barrel. When this balance is found, the bullet leaves the barrel flying true, with the proper spin for in-flight stabilization. Lead bullets of the wad cutter or semi-wad cutter design were popular because they cut neat caliber size holes in targets, which made scoring easier. And, in some cases, due to the neatness of the hole, scores improved.

From a terminal performance standpoint, soft lead bullets can be pushed fast enough that they will deform or expand but like with modern jacketed expanding bullets, expansion always limits penetration. Hard cast bullets will not expand. This may seem counter productive but for a bullet to be terminally effective, but first and foremost a bullet must penetrate deep enough. Penetration is the hallmark of the hard cast bullet. In most defensive handgun cartridges you can expect more than 24 inches of penetration in 10% ordnance gelatin. That’s more than twice the penetration of modern, expanding jacketed bullets!

Terminally speaking, penetration alone is not enough. Enter Elmer Keith, a cowboy, pistolero and gun writer of the last century who sorted this out. Keith wanted an all-round bullet for target shooting as well as hunting and self-defense. His semi-wad cutter design had a wide meplat or nose that was about 65% the diameter of the bullet. By shooting about everything that walked the earth west of the Mississippi, Keith proved that his concept bullet, with a Brinell hardness of about 11, was the answer.

With a hard cast, flat nose bullet you get deep penetration but you also get a reasonably good wound cavity. This is because that flat nose cuts through bone, muscle and cartilage, and creates a large splash. Some believe that for handgun hunting the Keith style bullet is better than modern expanding projectiles. Others believe that with low velocity defensive handgun cartridges it’s a better option too. One thing’s for sure, from a terminal performance standpoint, a hard cast semi-wad cutter bullet is not the same as a full metal jacket; the damage it will produce inside a gel block or a living creature far exceeds that of a common FMJ handgun bullet.

If you’re a handloader, hard cast bullets are also cheaper, costing about half what modern hi-tech jacketed bullets do. For preppers and survivalist, the hard cast bullet is the obvious choice because you can cast – make them – yourself. Where would you get the lead, antimony and tin? That’s easy, wheel weights. Bullets cast of wheel weights will have a Brinell hardness of between 10 and 12. That’s just about perfect for most defensive handguns.

Don’t want to make your own? No problem; several manufacturers offer hard cast loads. Buffalo Bore has them for cartridges as small as the .32 and .380 ACP. Both are capable of shooting though one bad guy who’s hiding behind another bad guy.

Hard cast bullets are a viable defensive handgun option, one that offers very deep penetration. If you’re concerned about over penetration the hard cast bullet is probably not the answer. On the other hand, if your idea of a defensive handgun is one used to fight off a marauding grizzly or a 400-pound zombie, and if you want to be sure of adequate penetration, no matter the shot angle, they are probably be your best bet.