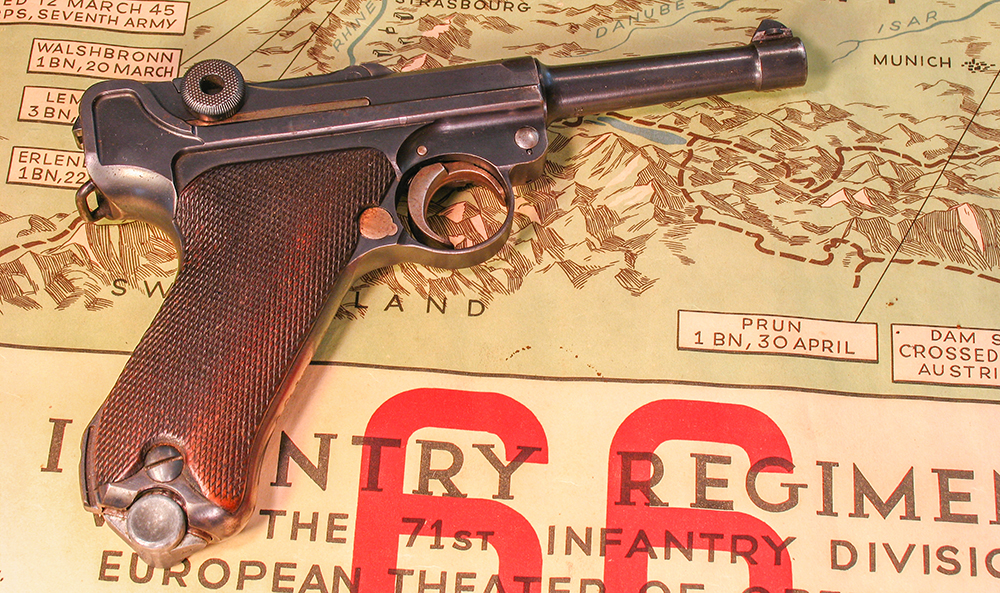 They are in every family.  Guns, maybe not all that special to their original owners, but guns families cherish and hold on to. If for no other reason than to keep a loved one that has passed on, close to their hearts. Talk to any gun owner and you can find a story. It may be about their Grandmother’s 257 Roberts she used to shoot Montana mule deer so she could feed her kids, it may be about their Dad’s old model 12 he handled with the all the grace and skill of an artist’s paint brush, or maybe its just an old Remington 22 rifle their uncle taught them to shot with.

These are the guns in our safes or hidden in our closets that we will never part with. The guns we will pass on to our children, along with the stories that have made them so much a part of our hearts and family history. These are the guns that instill that ghostly sensation when we pick them up.

My grandfather was a major influence on me. He lived less than a half mile away and I walked to his house to visit several times each week. Grandpa didn’t have a real job but was always working on something. He owned several rental properties and was a member of the local Board of Education, which was a remarkable accomplishment for a man that only went as far as the third grade.

Grandpa had always been a farmer but mostly he was an entrepreneur. He was born in 1905 and during prohibition learned that a fellow who didn’t mind breaking the law, and who had some sense, could make a good deal of money moving moonshine from place to place. Apparently, Grandpa was good at it because he managed to finance a theater, a grocery store, and even collect a good bit of property before he passed on.

Grandpa was always eager to teach his grandkids about stuff. Like how to plant green beans, dig a sewer line, prune an apple tree, and about anything else he needed done. I guess he considered us cheap labor but, in the end, we were the ones that benefited the most. He knew a lot about a lot of things and was always eager to share that knowledge, but I never could get him to tell about running making moonshine.  Except for one story.

Seems Grandpa was walking along the railroad track into town. He had a pint in one pocket and a pistol in the other. Just outside of town he met the sheriff walking the other way. The sheriff asked Grandpa if he had a “snort” and Pa pulled out the pint and passed it to the sheriff all the while keeping his other hand on his pistol. He said the sheriff downed half the bottle, passed it back and just walked away.

Pistol packing was something Grandpa continued until the day he died. No, he didn’t carry one every day or everywhere, he went but if he thought he might have a need to pull one, he had it within reach. I remember once we were going to deal with a particularly difficult fellow. Grandpa got in the truck and threw his model 10 up on the dashboard like a farmer would a set of fence pliers.

Grandpa’s brother, a constable, gave him that model 10 sometime in the 40s and it became pretty special to his six grandkids. We all looked forward to shooting “Pa’s pistol”, as it had come to be known. I remember when I was about 10 years old, I had a coon dog that was good for nothing. Grandpa convinced me the best thing was to put him out of our misery and he sent me behind the house with his Smith & Wesson.

When Grandpa passed away it was a big loss. He was a strong willed individual; an old hickory stump and the nucleus of the family. He left a fairly detailed will and us grandkids, who were all hunters and shooters, wondered who would get, and ashamedly lusted for, Pa’s pistol.

In the end the decision wasn’t hard. Of the six of us, five were boys. My sister being the only girl got the model 10. Sis owns and runs her own business now, which by the way has nothing to do with contraband whiskey. She also has her concealed carry permit and she can shoot pretty darn well. I guess you could say she is a “pistol packing mama”. Come to think of it, that was one of Grandpa’s favorite songs.

There were two Boer Wars. The first, from 1880-1881, was known as the Transvaal War. It was a brief conflict in which Boer settlers revolted against England’s attempt to annex the Transvaal. In an attempt to expand their presence in Africa to include the Dutch Boer republics of the Transvaal and Orange Free State, England struck again in 1899. The gold mines located there were part of the reason, but Britain also looked to establish a Cape-to-Cairo confederation of British colonies, which would give England domination of Africa.  The result was a long and bloody war that lasted until 1902.

Most Americans have limited interest in and even less connection to this war.  However, it has interested me since my first African safari. “Boer” is the Dutch word for farmer which came to denote the descendants of the Africans speaking, stock raising farmers who fled the British Cape colony to escape English rule.  The area primarily settled by the Boers was the Orange Free State and Transvaal which together was known as the Boer Republic. Boers employed a guerilla method of combat that stretched British logistics to the limits. (Seems England had learned very little since their war with America.)

Hennie Badenhorst was the owner of Lyon Safaris. Badenhorst, a veteran of the South African Defense Force, is an accomplished professional hunter with over one hundred lion, buffalo, and elephant hunts under his belt. We were setting by the fire ring one evening watching the flames dance between us when Badenhorst remarked, “I have a rifle that was recovered from a battlefield during the Boer War.”

Badenhorst’s great uncle, who was a young boy at the time, was out playing in the bush and came upon the unimaginable scene of a battlefield where he found a dead British soldier. Being the good Boer that he was, he picked up the rifle and carried it home. It was a late model Enfield, Martini-Henry rifle converted to 303. Badenhorst remembers stories from his grandfather about having to hide the rifle out back every time British soldiers came by.

The rifle had been in Badenhorst’s family since the war. It was kind of a behind- the-door gun. When Badenhorst left military service and began his career as a professional hunter he frequently used the rifle when training his blood trailing hounds. Badenhorst set an empty bottle of lager on the rock rim of the fire ring and asked, “Would you like to shoot it?”

“Maybe a warthog.” Badenhorst said, as he removed his fedora exposing the scars left on his head by an angry leopard. “Tomorrow we will see many of warthog.”

Before the hunt we stopped by the range and I fired three rounds through the old rifle. Considering the crude iron sights, it shot well, and I managed a group of about two inches at 50 yards. After a full evening of hunting wildebeest and bushbuck, Badenhorst declared it was time and pulled the Boer rifle from behind the seat of his Land Rover. Just at dusk we spotted a field full of warthogs and Badenhorst picked out one about 100 yards away and asked, “Do you think you can hit him?”

I shouldered the relic, covered the dark pig with the triangular front sight, and pulled the crisp trigger, undoubtedly honed from years of use. We heard the “whop” of the bullet and moments later were standing over the warthog.

Badenhorst was all smiles that the old rifle had once again proven sufficient for the African bush by providing food for his staff. It was an honor to hunt with a rifle with as much history as this one. And, at least for now, no one has to hide it when the army comes by.

Like many Americans during World War II, Carl Anderson felt the patriotic pull and in 1944 joined the Army. In January of 45 he landed in France and along with the rest of the 66th Infantry Battalion and started a long and cold march across Germany.  During one stretch they were engaged in combat for 58 days straight!

Like many American soldiers Corporal Anderson collected a few trophies and gifts along the away. His record of items shipped home included a German hunting knife, a babies dress, and various other incidentals for family and friends.  One thing not listed was a 9mm German Luger pistol. CPL Anderson’s grandson, Chris Ellis remembers, “When I was young I would go over to visit Poppa Carl and we would set on his bed and he would show me how to take the Luger apart.”

Unlike some of the other souvenirs Anderson acquired, he came about the Luger in a rather unique way. It seems CPL Anderson and several other soldiers were clearing a building in a German city. Anderson stepped around a corner and a German soldier began shooting at him with the Luger. A bullet grazed Anderson’s neck but he quickly returned fire with his rifle, killing the German.  Figuring he’d earned it, CPL Anderson took the pistol and the holster. He carried it as his own the rest of the time he was in Germany. Ellis said, “Pops told me he used the pistol frequently in combat.”

The Luger is in excellent shape and appears to have been manufactured about 1909. Unlike many of the military Lugers you see at gun shows this pistol is of commercial manufacturer and both the holster and pistol are marked with what seems to be police unit markings. If that’s the case it would be interesting to know how the German soldier came to be armed with the Luger. Or maybe Pappa Carl shot it out with a German policeman. In any case, the Luger still functions perfectly and shoots very well.

The holster is complete with the loading tool and extra magazine and all serial numbers match. Ellis, curious to learn about the pistol took it to a local collector who valued the gun and accessories, on the low end, at around $ 2500.00. I asked Ellis what he thought about that and he said, “That’s pretty cool but they haven’t printed enough money to buy Pop’s pistol.”

Like these three guns from three different continents, somewhere in your family there is very likely that special firearm that has a connection to the past.  Make sure the story that goes with it is passed on to your descendants. Write it down and stick it in the case with the gun, or maybe place it inside of the stock or under the butt plate.  Someday it will be even more special to someone else than it is to you.