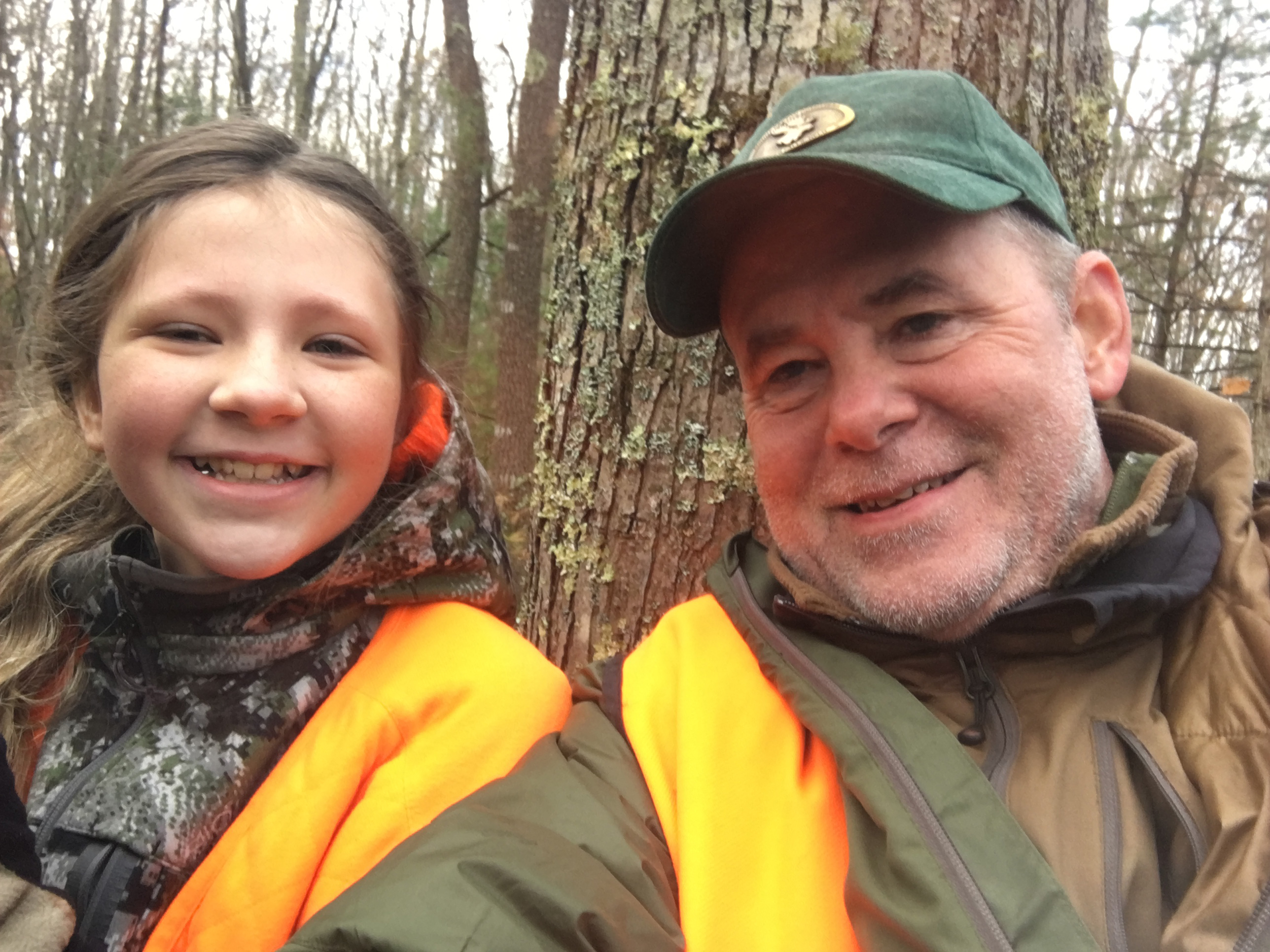 This is the first deer season I’ve spent without my father to tell the stories to. It’s just not as much fun.

December 1964: The deer hunter set on a rock with his rifle across his lap. It was the last day of season and any deer was legal. He was hunting a ridge that fed down from a high mountain. Closer to the top than the bottom, he could see below him well. To his right and left the ridge dropped into deep hollows. Clumps of head high mountain laurel dotted the landscape. The temperature was cool but comfortable and the hunter was wonderfully content, alone on the mountainside.

He was a long way from camp and farther from home. His wife, who usually accompanied him, was at home pregnant with their soon to be first-born. After 12 years it looked as though he would now become a father. Munching on an apple his thoughts drifted. He was anxious, about deer he may see, and the son he may soon have.

As dusk approached the hunter heard something off to his left. Several deer were moving down the ridge just over the break. Finally, he managed to make out the body of one of the larger deer as it browsed among the thick tangle. With the deer at about 60 yards he shouldered his rifle and squeezed the trigger. At the shot the deer disappeared and he called a miss. In an instant there was another deer, a wide racked buck, coming his way. Under the premise his first shot had gone wide, he worked the pump on his rifle ejecting the empty. That’s when the rifle’s magazine fell to the ground. The big buck slid to a stop some 30 feet away and watched the hunter desperately trying to ready his rifle.

More movement distracted the hunter and his attention was drawn back to the spot where he had fired at the first deer. There, another buck with a nice rack was trying to gain his feet. The hunter’s first shot had been true, breaking the deer’s back. The remaining buck bounded away as the hunter stood, satisfied he now had venison for his freezer and horns for his wall.

The hunter that day was my father and the deer he took was a 10-pointer with mirror image left and right antlers. Not a trophy book deer but one that would hold the title as being the best buck to come off our hunting property for 35 years. Over those 35 years more than 50 different hunters searched that same property for a buck that would un-throne my father’s deer. As you can guess, I chased after that dream too. At first by my father’s side; where he taught me how to hunt, how to slip along quite-like, and how to find the deer. Later, I chased that bigger buck on my own. I hunted hard.

When I was 17 I had my first chance. I was still-hunting an old timber trail on opening day. Gun at the ready, I eased along; one step, stop and look, one step, stop and look. I was checking every bit of the forest for any sign of deer. Another hunter appeared. He was doing the same, headed toward me on the old logging road. When we met we exchanged greetings and passed. Confident the other hunter had spooked any deer in sight of the road, I slung my rifle and started down his backtrack.

I hadn’t gone 30 feet when the largest buck I’d ever seen stepped into the trail. We were only a handshake apart. Our eyes met and we both knew the other had made a mistake. I struggled to bring the rifle to my shoulder and the buck bolted into the timber, disappearing as quick as he had come.

Two years later found a hunting partner and I as guests at another family’s hunting camp. Just at daybreak on opening morning we were all gathered at the back porch talking strategy and readying gear. A field rose away from the little camp and across a high knoll. Feeling a little out-of-place in the family conversation, I eased over to the fence and started watching the sky turn orange. It was deer time.

As morning arrived, there silhouetted on the ridge at about 200 yards, was a wonderfully nice buck. His rack was easily seen without the aid of binoculars. I dropped to a prone position as I alerted the other hunters to my find. One of the family members quickly yelled, “I got him, I got him!”

So, there I lay with my sights on this monster buck’s back waiting for the landowner – who so graciously allowed me to hunt his farm – to shoot and hopefully miss this wonderful buck. The hunter fumbled with his rifle for what seemed like an eternity as the monarch walked into the woods.

It was a long time after that before I got another chance at a deer that might equal my fathers. Sure, I put deer on the meat pole but they were nowhere near Dad’s deer. The funny thing about his deer, each year it seemed to demand more respect. I was still chasing.

When I got out of the service I went back to the family farm that was absolutely littered with deer. Home just before opening day I was without a rifle so borrowed Dad’s. I was working nights at the time and did not get into the woods until around noon. My hopes were that other hunters coming out for lunch might get deer moving. As I entered the timber in a deep hollow at the edge of a field, I saw a heavy racked buck running down the ridge toward open ground. Another chance!

When the buck entered the field I applied what I calculated to be the proper lead and fired all 5 rounds from the rifle. The buck disappeared over a little rise in the field and I was in shock I had not connected. I quickly slammed a fresh magazine into the rifle and sprinted to the top of the rise. And there, standing proudly about 150 yards across a draw was the buck. With a rack much wider than his ears I knew this was the one. After the next five shots the buck slowly walked into the tree line, with me, out of breath and out of ammunition.

“Did you hold a fine bead?” Dad asked.

The 2000 hunting season found me back at our old hunting camp. On the same ground the now almost mythical 10-point my father had taken 35 years before had come from. A much-improved hunter, I had taken the love of the outdoors and the skills my father had shared with me and built on them. I knew how to hunt deer now. Dad didn’t get out quite as far as he used to. Bad knees and an obligation to stay close to take care of Mom, should she need something or should he think she did, kept him and his rifle near camp. We’d worked together that summer to build him a stand in earshot of the cabin.

It was the day after Thanksgiving. I left Dad at his stand and eased up to the top of the mountain. It was a cold 13 degrees when I slipped into the area I had been scouting. In September of that year, just below where I now set, I’d found a 13-inch strip of velvet at the base of a battered laurel bush. I knew he was there, and I was in his bedroom before daylight.

Just as the sun cracked the darkness, with its golden rays breathing life into the colorless forest floor, it happened. A doe burst from other side of the hill onto the big flat I was watching. Right behind her, nose down and in a strut, was the buck. She darted among the wind-blown oaks on the hilltop flat with the buck in tow. I had to make a move before she led him away. I found an opening and fired. He was hit. The buck spun and come toward me and when he stopped broadside at 60 yards I put the second bullet through both shoulders. He wheeled toward me again, head down and coming fast. At 23 steps the rifle roared for the third time and he fell. Three shots, three hits: one for every missed opportunity over the years.

I desperately wanted to drag the big 12-point into camp by myself but even downhill it was too much. As bad as I hated it, I left him on the hillside and walked to Dad’s stand at the bottom of the mountain.

“That you doing all that shooting up there?” Dad asked.

“Yep.” Trying to stay calm I held out a shaking but bloody hand.

“After the second shot I figured you missed. Is he a nice one?” Dad was smiling.

“He’s the bull of the woods Dad.” I was smiling too, and I thought the chase was over.

That evening around the campfire under the stars of Orion, I watched my father as the flames danced between us. I thought about how he had put up with my rowdiness in the woods and other places. It was appropriate that he’d been there to help bring out the deer that would finally eclipse the one he’d brought out 35 years ago. It added to the fond memories of being at his side during the many hunts he was never to busy or selfish to take me on.

It was then I realized that this trail my father had blazed for me to chase him down was much more than for the quest of a bigger buck. It was a road he had built to help me become a hunter – and father. And my chase I now realized, was far from over. For I had a young son at home too.

It’s not the 10-point buck anymore; it never really was about that deer at all. It’s the obligation to instill the spirit of the hunt in my son like my father did with me. He must be provided with goals to pursue and he must be taught by the good example I must set. I have the obligation to lay the footprints for him to follow while he chases the wide antlered dream just as I did. The gift must be passed on. I must make him a hunter too.

The original version of this story was published in the book, Under Orion, which is available from AMAZON.