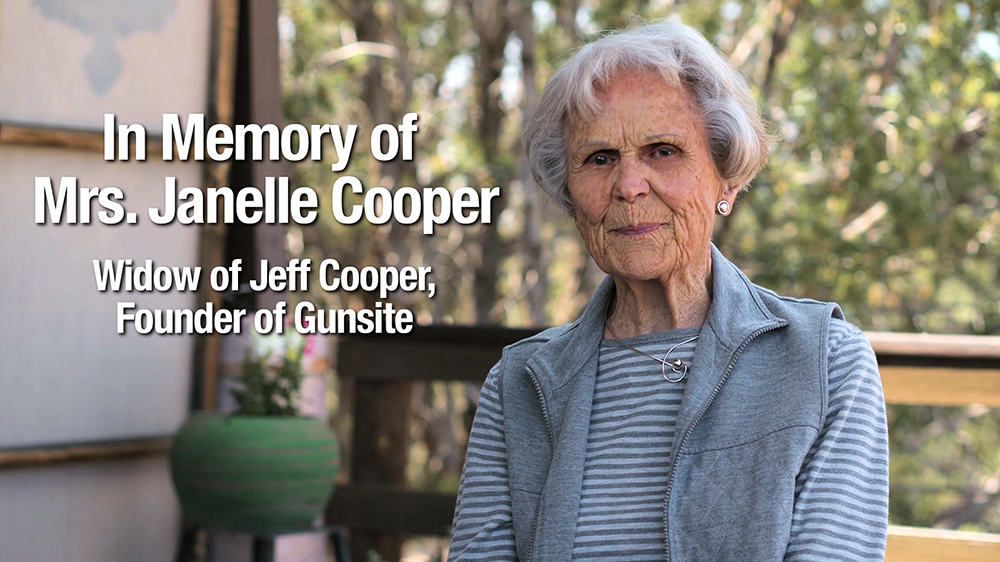 Many patriots have spent a week with Jeff Cooper learning to run a gun, and then they would stop by the Sconce for refreshments and some social time with his wife Janelle, who would connect with them in a different way. After Jeff passed in 2006, Janelle continued to greet the Gunsite students. As remarkable as Jeff was with his clinical ability to codify and teach the operation of an object, Janelle was just as remarkable in her understanding and care for the human emotion.

Like the astute clinical psychologist Jordan Petersen so eloquently observed, men and women are different. Men tend to have a proclivity for things, and women have an inclination for other humans. This partly explains why the nursing field is predominately filled with females—they’re generally more agreeable to taking care of others. On the other hand, the engineering field and other occupations dealing with things are, by and large, occupied by men.

Aside from the psychological science supporting these conclusions, the preponderance of obvious evidence exists. Forget occupational inclinations and just look at the average home life. The man is the one who most often fixes broken things and the woman is the one who most often cares for the health of the family. Dad repairs the leaky roof, replaces the door knobs, and teaches the kids how to play with balls. Mom prepares most of the meals, tends to the sick, and massages emotions.

Why is any of this important and why on earth am I even bringing it up? Because the perfect mix—or woman-man relationship—would be the personification of this balance. And, over the long term, the fruits of such a relationship are very ripe, or you might say produce successful offspring and endeavors.

Case in point, the late Jeff Cooper, with his interest in things/weaponcraft, is responsible for the creation of the longest continuously operational and most well-regarded civilian firearms training academy in the world. His name will not be forgotten, even after the free man is nothing but a memory. His balance was Janelle; his partner, who while supportive of his views and character, provided an unrivaled element of care, compassion, and humanity.

Janelle Cooper will forever remain as one of the most amazing people I’ve ever met. And though we are all saddened at her passing, she lived an amazing and productive life that lasted just short of a century. If a person’s worth were to be measured by the impression they left on others, after but a few moments of interaction with Janelle, none of us could afford to pay the taxes on her value.