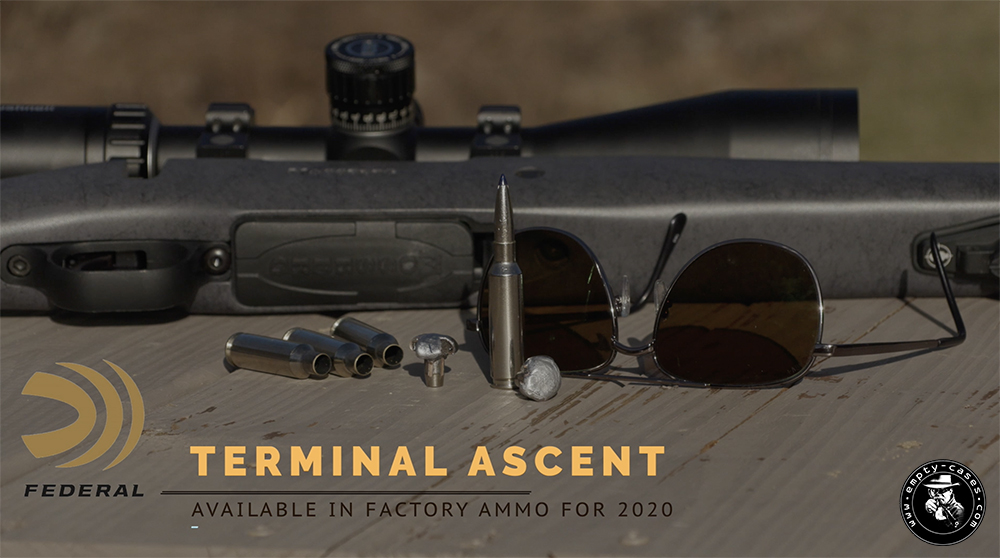 For the last several years the demand for rifle bullets that will fly flat, hit hard at distance, and still deliver desirable terminal performance has increased. We’ve seen several offerings attempting to fill this need. That’s not a hard bullet to build. Where it gets complicated is creating a bullet that will work at long distance and up close. Building a bullet in this manner is difficult because it has to in some cases work within an impact velocity window of between about 1600 fps and 3200 fps.

For 2020 Federal has released a new line of rifle hunting ammunition loaded with a new bullet. It’s called Terminal Ascent. I recently tested some pre-production samples of this new ammo in a 6.5 Creedmoor and the initial results look promising.

This new bullet comes with the common but in this instance a very different polymer tip. It is heat resistant to prevent any degradation in BC during flight. But the Slipstream tip, as Federal is calling it, is different than other designs, and this difference has a huge effect on what the bullet is able to do. Most importantly, Federal has a patent on the tip’s hollow core that initiates expansion even when the bullet is traveling at lower velocities.

The inspiration came when the Federal engineering team drilled a hole all the way through the center of the tip. Upon impact, that hole would allow target media into the front end of the bullet to initiate expansion. The engineers tested the concept and it worked perfectly. It extended the performance range by a few hundred yards.

Further testing and development lead to another breakthrough—one that not only improved terminal performance but also improved accuracy and decreased drag. The engineers found that they could actually close up the front end of the tip and still get a high BC. The bullet would still expand on those low velocity impacts, because the front end of the tip would break off and reveal the channel, allowing media to enter. This discovery allowed Federal engineers to maintain the small, aerodynamic meplat of a solid polymer tip while getting the same guaranteed expansion at distances where other bullets fail to open consistently.

It also has a skived jacket and a large hollow point nose cavity to help initiate expansion over a wide velocity range. The bullet is of the bonded design with a solid copper jacket and a lead core. Like with the Nosler AccuBond this is a proven concept that delivers a great balance of expansion and penetration. However, unlike the AccuBond the Terminal Ascent bullet has what Federal is calling a AccuChannel – which is similar to the grooves in a Barnes Triple Shock – to help with accuracy and eliminate fouling. AccuChannels are a bit different from other bullet grooves. While most are a straight-cut grooves, Terminal Ascent bullets have sloped grooves. This helps the bullet to be more aerodynamic, which boosts the ballistic coefficient. And finally, the bullet has a solid copper shank and is nickel plated.

I fired the bullet into a block of Clear Ballistics at 100 yards and then downloaded the bullet to replicate 300 yard impact velocities and did the same. Performance was about what I would consider ideal and very similar to the Nosler AccuBond, which is a bullet I’ve used extensively with great results. (Note: Downloading a bullet for terminal performance testing is not the optimal approach because the reduced muzzle velocities also reduces rotational velocity. This tends to degrade terminal performance.)

Check out this video that includes some of the testing that was conducted with the new Terminal Ascent ammunition.

Federal will be initially offering factory load in Terminal Ascent for the following cartridges: